Posted on May 29, 2015 by Raymond David James Chambers

In the press recently, you may have noticed that there have been some talks about the BBC Micro:Bit project. BBC posted this article stating that the Micro:bit will be compatible with a number of programming languages. One of these languages mentioned was TouchDevelop. Touch Develop is a relatively new programming language for many people but it’s actually been around for a while. 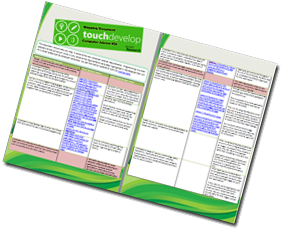 I have decided to run a 6 week course which will run on tuesday nights from 2nd of June through till the 7th of July. I’m going to run these from 4pm till 5pm while people are still in school. The idea of the course is that you will be shown something different each week. We will start off with the basics which will show you how you can get the program to say ‘hello world’ and we’ll move onto using some built in libraries which will help your students understand the basics of loops.

If you would like to take part in this course, then sign up here and I will send you out a link to the Skype address where we can go through the presentation and some activities step by step. If you’ve signed up and you weren’t able to make it, we’re hoping to release some recordings on my YouTube channel.

I am the Lead teacher of computing at Brooke Weston Academy in Corby Northamptonshire. Previously I was the head of IT/Computing at Uppingham Community College. In 2015 I won the Gold National Teaching award for Innovative use of technology. I also won the 2015 Young Game Bafta - Mentor award. I'm keen to help students achieve their best and like to give them opportunities to do this. I have a passion for teaching and I enjoy meeting other people and sharing their ideas. I have a keen interest in games development as well as developing the use of ICT in classrooms across the curriculum. In my spare time I teach Irish dancing. I have been Irish dancing since I was 11. My highest position was 14th at the world championships 3 years running and 2nd at the Great Britain Championships in 2006.
View all posts by Raymond David James Chambers →
This entry was posted in Uncategorized. Bookmark the permalink.